June 25, 2009
It was a mishap that happened during my hike at no.5 moon gate hill @ youth park.
A 50+ woman fell down, with blood over her head and wrists were seated at the side of the stairs with a few others consoling her that she's going to be safe.

There is a man called an ambulance explaining where youth park was (it took him a while for the operator to get it)
Soon, I saw a tattoo-ed man rushed down from No. 5 rest area with the orange stretcher.
(Yes, I walked up and secretly took these pictures which I think it's precious) 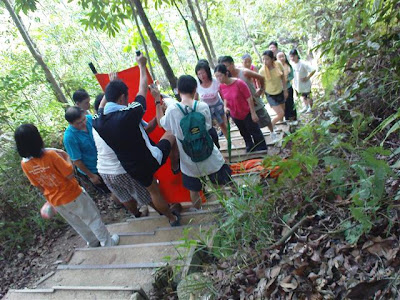 Soon, they fixed the stretcher to be straight before carrying the casualty. 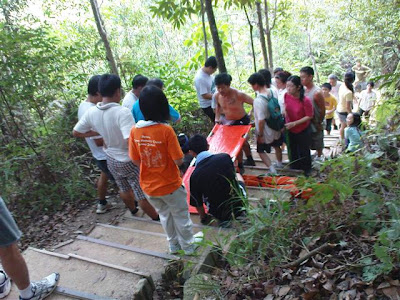 1,2, Up..
Off strong men yet gentle to the woman whom believed may have fractured herself. 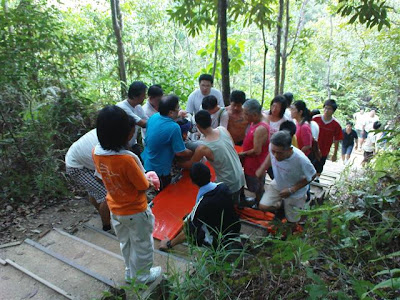 Casualty finally safely lying on the stretcher and they were tying her up to ensure that she doens't slip and fall.
So, they were ready to transport her downhill. 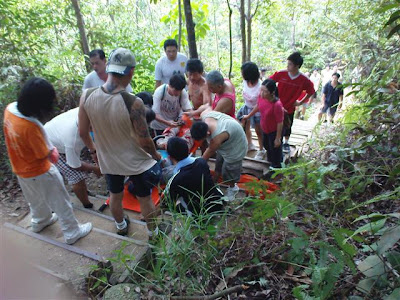 I salute the effectiveness of the regular hikers who have basic first-aid knowledge.
These men really made Penang proud.
At least, we know that it's really 'safe' to hike around youth park as there are 'experienced' hikers around to save the day!

meiyi said…
hahaha..
i wish i can be a reporter
should i submit to thumbnails@thestar.com.my? :)